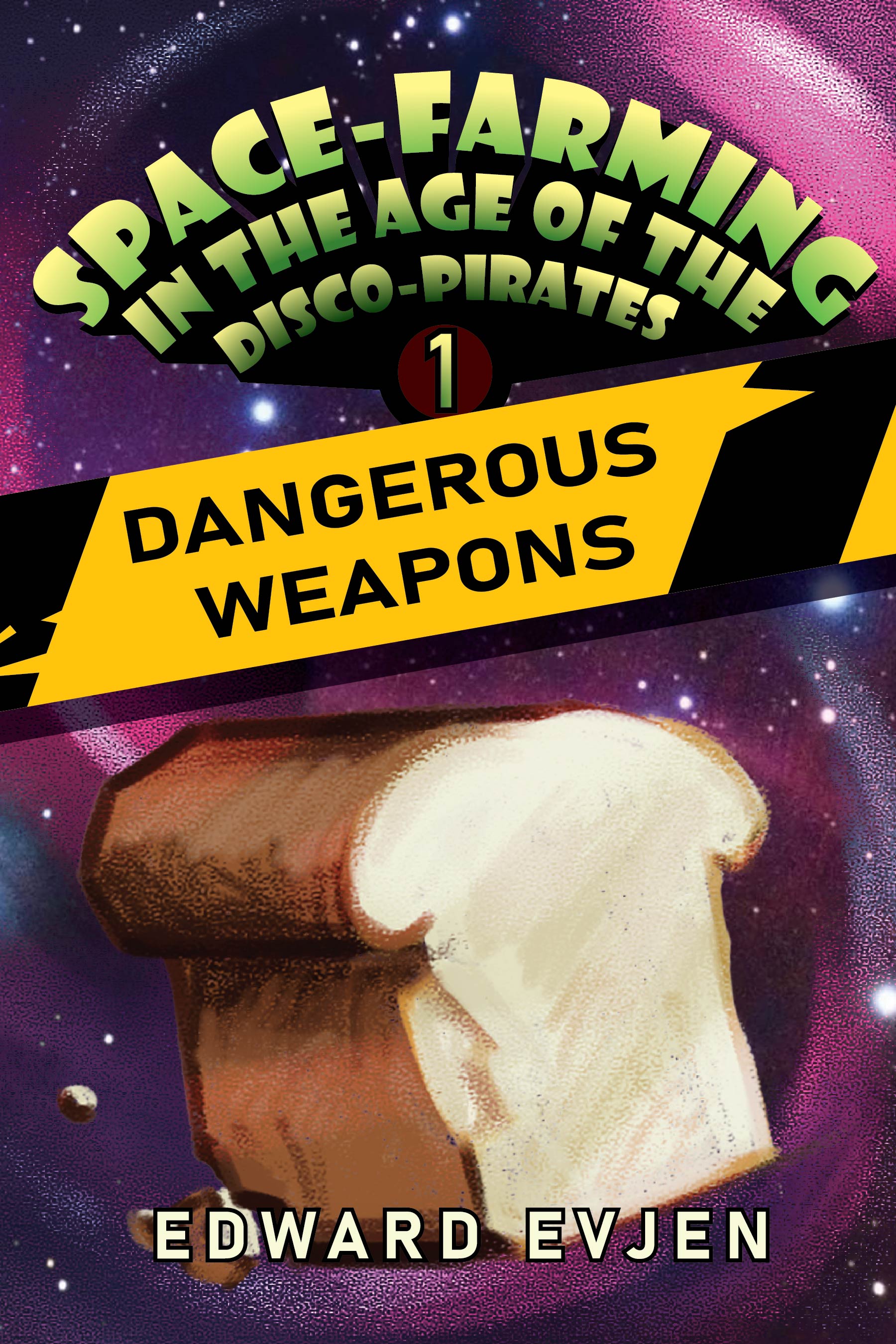 Weighing in at 110,000 words and with four interior illustrations I am proud to announce book one of my space opera.

Charles Meyer, a gambling addict farmer with a temper, is barely holding on. And it gets worse.

He is attacked by disco-pirates, a villainous mega-tycoon, and a corrupt government. Charles gets into gambling debt with the casino.

With so much going on, he joins a criminal gang. Learns the value of friendship–with the help of a religious cult. And eventually hurts everyone he loves.

This is a book about being a tiny mortal bug in the universe and fighting impossible odds. It is blanketed with comedy.

Until the publication of book 2, I will be offering a free copy to readers of writingtemple.com. Sign up to my newsletter (Bottom footer on the left) to get a free pdf copy.

The next step is to get as much free publicity as possible. Submitting it to book lists and the like. Support me as I work on some short stories and book number 2, drop a comment!

Novel #1 of Space-Farming in the Age of the Disco-Pirates was enjoyed by my beta readers. I am proud to publish it, but first the cover illustration, one last fine-comb edit, and some interior illustrations.

I do all my illustrations and covers, for better or for worse.

It will be published January once the final touches are done.

I am working on Vapor Basin part 2. It pales in comparison to finishing this novel.

Space-farming in the age of the disco-pirates has 9,999 more words to be edited. Yes that’s right, only four digits. 97959 words had been edited into a second draft. I am happy to say the book is readable. A reasonable person can follow the plot from word one to word 100k.

I’ll finish up this second draft soon and get started on the third draft. Once I edit chapter one again I will re-post it explaining changes from the previous version.

The third draft will see to clarity. Many setups are vague, I want to play those notes louder earlier. In particular, a biker gang (space-bikers) loses trust in their leader, but right now it comes out of nowhere. Putting some work into that will be good.

I feel that the third and fourth drafts will be lightning fast. Especially compared to the second draft. I deleted 15000-ish words of first draft material. And wrote 20,000 words of fresh material. The book is at 108331 words. I am hoping to bring down the word count slightly. 108k words isn’t bad, but I have a feeling the narrative is a bit bloated.

I love the settled title for the book, Space-farming in the Age of the Disco-Pirates. I am really happy that I got a lot of fun things in there. Food-tyrants, Gambling, Heists, Drug running, and of course Disco-Pirates. They are the first and last villains of the book. I love how my initial idea of having one villain, the Pirate Queen Dina, grew into a cast of four villains. Mr. Paulo–casino owner, Prime-President Macka–leader of the free world, and Xercan–the universe’s primary food supplier. I take a great bit of pride in my villains. No by the numbers evil here.

Anyhow, thanks for your continued interest.

That’s it. I’ve believed it for a long time now. Recently, I racked my mind trying to think of anything — anything — that is more important than character. I don’t want to spend hundreds of hours writing a story that no one will read.

Novels are unique in human entertainment because they go deep into a character. Think of a character as a friend telling you their story. We listen to stories because we want to fit in socially with others.

A nonfiction book on auto-mechanics will improve your understanding of cars. A novel (especially fantasy) doesn’t improve are relationship to things, but it does to people. That is why novels are read and why people pay to read them. Escapism is part of the reason, but it doesn’t explain difficult to read stories like the novel, ‘These Lovely Bones.’ Getting into the mind of character and seeing how they tick is what keeps our unconsciousness mind engaged in stories.

So I am focusing on character.

The main character of ‘Spacefarm’

You see I’m hitting some snags while outlining my new ‘Spacefarm’ novel, (Though I think I’ll change it to ‘Galaxy-Farm.’) The character Charles isn’t grabbing my attention. He is boring.

At first I had him anti-social and a loner, but this felt way to cliche and I just wasn’t buying it. Why did he go out to gamble? Why does he explode in anger on people? So I changed him from anti-social to badly socialized — think two year old who won’t share his toys. This has led to way more social telling possibilities, namely his bad friends who are holding him back. Misery loves company. This lets me focus the story. Turns out that his problem is gambling, not his devil-may-care attitude towards others. Everything bad about his life works together to make his life bad — but not unbearable.

He only changes (In the same way you only change) when his life becomes unbearable. An unavoidable collision course with destiny. The refocus on Charles’s problems is necessary to make the struggle fun to read. When Charles’s destiny comes at him like a raging bull it isn’t about him not working with people, its about the kind of people he works with. His new friends, despite being criminals, actively push him towards doing good.

That deserves some clarification. They are criminals in the broad sense of the word. In the same way if you collect rain water for later consumption in America, you are a criminal. The government of planet Iora is corrupt, but I digress.

How can I get Charles from being a cliche bore to a driven protagonist? The answer is simple but requires lots of work. I am reading stories of people with gambling addiction, people with anger issues, and analyzing my own life for examples of both. These will be the problems he struggles with.

Sounds like an awful character right? Yes. But you are going to like him anyway. Because I won’t merely describe his flaws, I want to understand why he returns to his addictions like a dog to vomit. Empathy will create investment, which when Charles is chased down by space-pirates, suspense. Hence the research.

God willing, it will all work together and I can have an exciting novel with a crazy son-of-a-raccoon man everyone loves.

Your Call to Action

That’s all for this post. There is more to be said on character. In particular I will write more about developing a characters arc, avoiding generalities, and developing danger to relate to his problem. But I want to get back to outlining my novel.

Now that I’ve finished one novel, I want to avoid the tragic rewrite stage where nothing was working. I am under no delusions, I know it will happen again. But, I want to set up my next novel for success.

It is a science fiction crime novel with disco space pirates, an evil CEO who owns everything, and an alien baking show. The crime involves the theft and farming of illegal plants.

I love it and I’m excited to get it in your hands.

I kind-of went ham and wrote 40,000 words without planning it that well. So, I’m going to take what I did, see what works and cut what doesn’t.

What I Will Outline

Characters are more important than plot.

The outline will be based off character perspective. And, in turn, that perspective will be the audiences in the final book. I want people to want to read the book. I must make the character likable. There was a movie’s climax — I forget the name — that made me livid with rage at the filmmakers. The main character was a hate-able lazy snob who talks down to people and walks around with a sneer of his face. During the emotional climax of the film, the music swells, the camera frames him majestically, and he gets the courage to solve his “problem.” (Whatever the hell it was I lost interest)

During that scene, the filmmakers were trying to sell this person as a close friend overcoming struggle. But he was not my friend and it made me hate the movie instead.

Therefore — the outline will start with introducing Charles.

How can I introduce Charles the Space-farmer, describe his flaws, set him on a collision course with destiny, all the while making him chummy with the audience?

I don’t know, but I’m going to find out during the next week. I’ll be blogging as I mind-map and outline but as soon as I have a finished outline I will step away from the blog to write.